After the Tapi debacle we needed some rest and relaxation; a trip that would give us good views but with less stress and way more chill than we had felt over the last 5 days. After a night at Rarangi campsite with perfect clear sky weather and some decent food we all felt slightly more mentally capable of making decisions about what we were going to be doing for the next 5 days before our ferry back to Welly. This somewhat simple decision turned out to be harder than expected; somewhere too far from civilization after the last experience was not allowed (the cars were not longer trusted), some people wanted to hug trees in river valleys, some people wanted the glorious mountain tops and the summits, some of us didn’t give a fuck we just wanted to go tramping.

We had decided that we would head into some hut in the Wairau valley but I opened my big mouth again and suggested a loop in the seaward Kaikoura's - I love trees and will be a tree hugger for life but we had just spent four days in a gorge and on a mountain in full cloud with no views and I needed VIEWS. Discussions started up again… but finally the decision was made  and we headed to the hills.

The drive towards Kaikoura is one of the most stunning stretches of coastline; as you round the corner into the bay the snow capped mountains rise out from behind the rolling grasslands and if you weren't feeling excited about climbing 2000 meters in elevation before, you are now.

Anyway, onto the trip…

We’d finally made a decision, we'd rolled into Kaikoura by early afternoon, food and port ready (Isaac and Colan had made themselves useful for once while waiting for the keys in Blenheim), now all we had to do was faff around in the carpark for an hour. We pushed up to Fyffe hut in something like an hour 30 admiring the snow capped peaks around us and loading our shoulders with wood as we went. The evening was clear, we melted snow on the fireplace and ate tacos (avo, capsicum, spiced rice and beans) while our poor hut mates looked despondent with their dehy. Early to bed after a game of cards. The weather the next morning was absolutely perfect (for a hut day). Sleet turned to snow and back to sleet (it was the first time Colan had seen a proper dump and he was salivating). Mt. Fyffe hut is basic as can be, so we had nothing to do but enjoy the company of our crew and play wordle on a peace of newspaper. At some point we went for a damp walk, collected wood and made more tea before 'fixing' Amon and I's mountain mops. Colan read us a story, we went to sleep.

The next day we woke up above a sea of cloud above the sea. Kaikoura's lights flickered in and out of its candy floss blanket. The air was clear, we packed up and headed across the snowbound ridgelines, a winter wonderland. We still didn't need our crampons - so far they had been carried for 6 days with no use other than weight training. 1602m above sea level, with the glistening ocean on once side and snow-topped mountains on the other, I was in pure viewing heaven. The view from Mt Fyffe summit (nicknamed Mt Faff in loving memory of the minutes and hours lost on this mid winter trip due to faffing)  was absolutely stunning. I'm going to use pictures to describe the following 2 hours across the tops because my descriptions will never be able to do it justice. 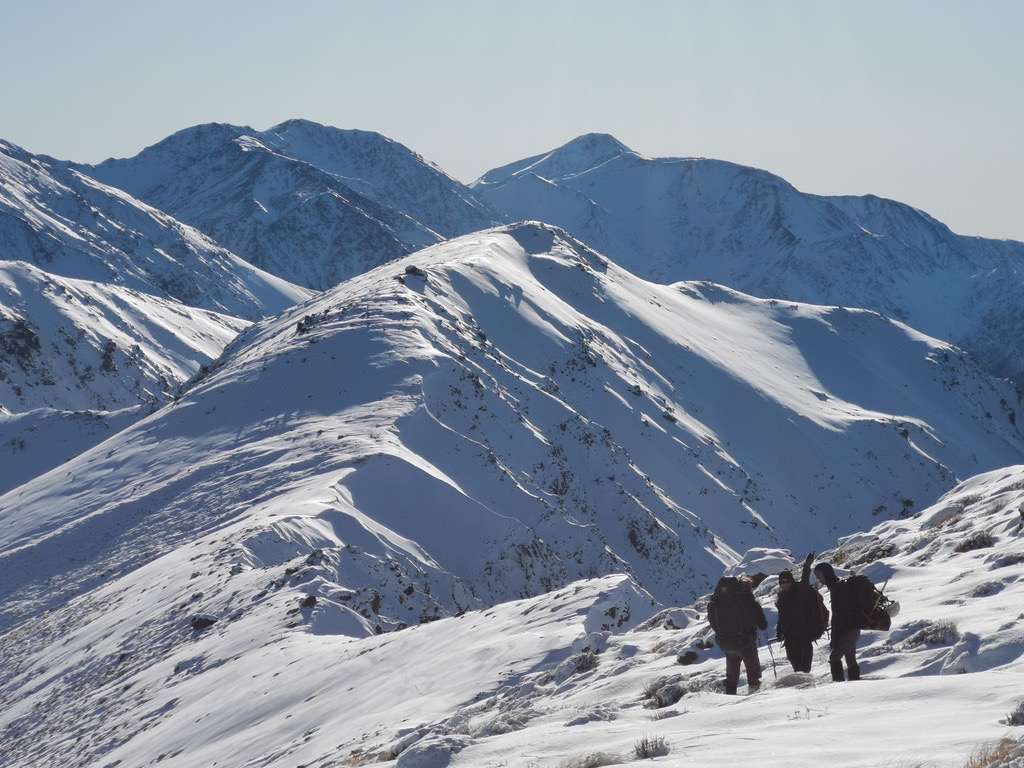 The descent was fucked.

Immaculate combination of scree running and snow sliding got us below the snowline but as soon as we made it into the valley everything turned to shit. As a place that got little to no direct sunlight in winter the creek bed was icy and dangerous. The next 2 km took 2 hours, if that says anything about the dire track situation and the state that we were in. Tired legs and minds and icy rocks that looked like dry rocks lead to everyone falling over all the time and a great celebration was in order by the time we made it to the hut.

Here is a picture of my celebratory face:

Everyone settled into the new hut, happy to be out of creek and with dry feet. Some time after dark 3 people showed up without sleeping mats or tents to the 6 person hut that we had occupied with our 6 people. One of them was wearing docs, they were cool. Siru decided she would live her best life and sleep outside in the woodshed which she modified as a sleepout - honestly looked like a great set up. She swears by it today so next time there's a hut full of snorers I think I'll give it a go.

By the time we walked out the next day I think everyone was keen to be out of this cold damp valley. We ended up missing the turnoff to the carpark and had to walk what was about 500m but felt like 3km back up the road. Putting on dry clothes and socks after that day felt like the best post tramp experience.

An evening on the beach at Kaikoura with a beer really created a beautiful ending to a beautiful trip, with everyone silently reflecting on their own experience of the last 9 days. We picked out a campsite at Kaikoura, did some swing dancing, cooked up a feast, ran down the beach with music blasting, went for a nudie swim (picture below), some calming yoga, and all clambered into bed for the best sleep we'd had in a long time.

But not really… because at around 11pm the offshore wind started up and blew Siru and Amon out of their tents. Amon migrated to the kitchen, but Siru sat in her tent holding it up to stop it from becoming a pancake for about 2 hours while I slept peacefully in the tent next door.

A truly eventful mid winter experience, they always seem to end up that way. See our Tapi adventure for the first  half of the crazy holiday. All in all, an EPIC group of people with EPIC views and some EPIC problem solving skills along with a LOT of faffing ended up as a super amazing trip. The best part about tramping in my opinion: getting to know everyone at the absolute worst and absolute best all at the same time - all adds up to lifelong friendships.