Sophie and I had been trying to plan a tramp together for too long, but it had always got canceled due to illness or atrocious weather. This weekend had promising weather but I had already planned my flat warming party bang in the middle of it on Saturday night, but a day trip was still possible. At the party, we still had no idea where we should go or if we would even feel like it the next day considering we were at a party. Luckily a taccy that night meant I felt quite alright in the morning.

The next morning I woke up motivated for a tramp, but where to go… The Tararuas and Rimutakas were quite familiar to me which meant they weren’t as interesting to me, the Ruahines are cool but the drive was far for a day tramp. I had done the main Aorangi crossing in that range but I had never been to the north side of it, Mt Ross, the highest point in the range at 981m, I liked this idea. Sophie woke up quite late but I called her and proposed the idea and she was keen. We checked the driving time on google maps and it told us 4 hours! That had to be wrong! Turns out there had been a car crash that morning which blocked the Remutaka road. We decided surely it would be cleared soon so we left with Kapakapanui as a back up plan. We got to Remutaka hill and luckily it had cleared but this wasn’t going to be our only obstacle…

The drive across the Wairarapa was pleasant although it took a bit longer than it should have with some questionable directions from Sophie. Upon entering the forest park we were greeted with a gravel road and I thought to myself about how I probably should have looked online for what the access was like. And I really should have… I thought we were almost there but the gravel section took us an extra hour. The further we drove the worse the quality the road got, it was winding,narrow and it had so many potholes which meant I had to drive about 30kmh most of the way. Towards the end I wouldn’t even call it a road, it was a four wheel drive track, and this was not a four wheel drive. And then we came across a massive rutt in the road, and I wasn’t sure if we would get over it. I got out of the car to inspect it. If I got stuck on this, we would be stranded far from civilization… I decided there was a chance I could get over it and I went for it. I felt the car bottom out slightly, but we didn’t get stuck. It was neveracking for the both of us but we made it and continued to the end of the road.

At this point it was 3pm already which meant we didn’t have that much daylight left to get up to Mt Ross, which was a little disheartening but we had come this far so we had to try. We also forgot head torches which was a little concerning. 20 minutes in and I checked the maps to realise we weren’t even heading the right way to Mt Ross, we were on the way to Pig Ridge. So we made a tough decision and decided to keep going the current way. This did at least mean we would definitely get to see Sutherlands hut, and this would make a loop up the valley. 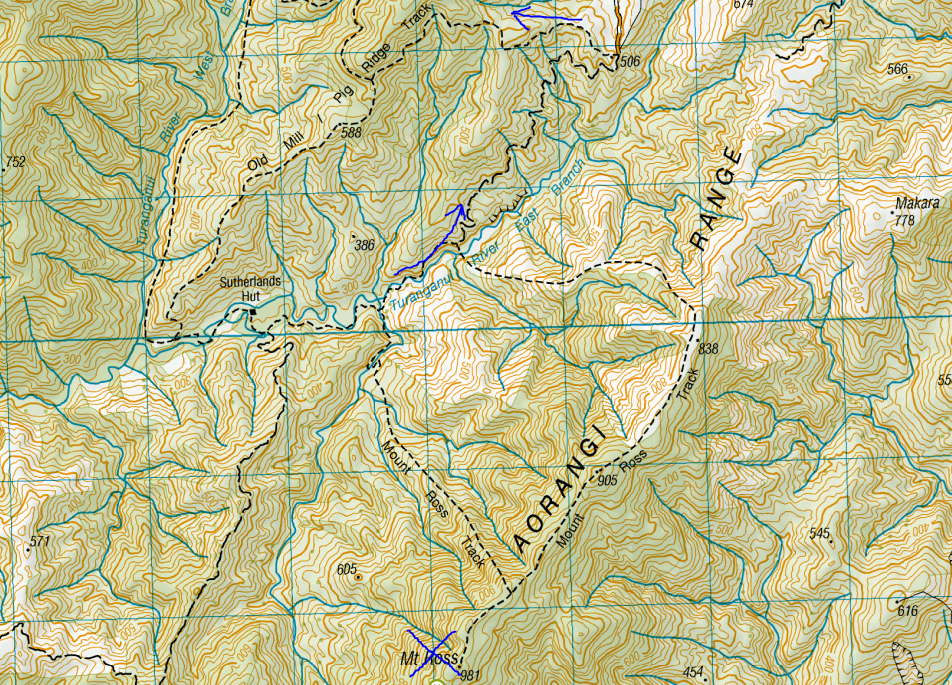 As we carried on we started to enjoy ourselves. The Aorangi Range has a unique vibe to it, it doesn’t get a lot of use, it’s very remote and it has a very summery / carefree feel to it. This raised our spirits. We then got on top of Pig Ridge and it was a lot cooler than I expected, it is not that high up but it’s actually all grassy along the tops which meant we got great views, and it felt as if we were above the bushline on a mountain ridge. There were also lots of cool clearings that looked great for sunbathing (but we had places to be). 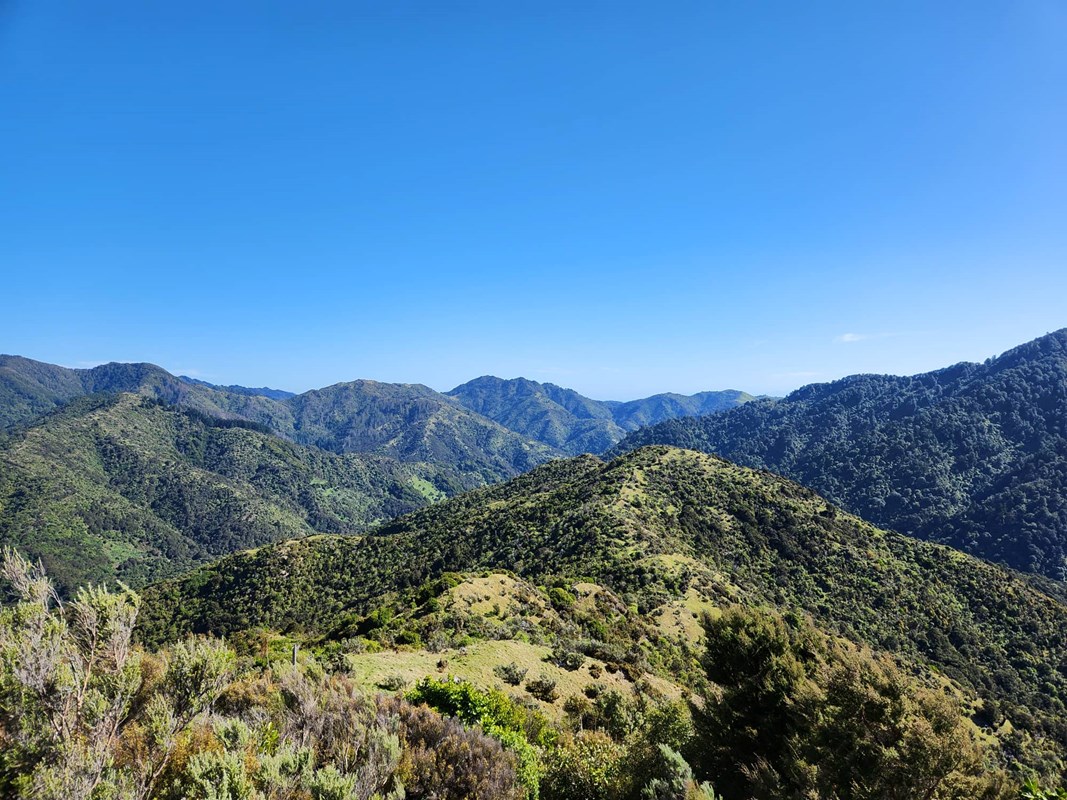 The track then dropped into the valley and Sutherlands hut wasn’t far away. But first we had an unexpected obstacle: a river crossing, something I forgot to check since I didn’t plan to go this way, also there were many of them. The first was too deep to cross where the track was, we bush bashed further upstream and found a shallower area to cross, this went well. But this wasn’t the real challenge, the real challenge was getting back on track from there. Between us and the track was a wall of dense bush that extended right to the river edge. We attempted to bush through but this was the densest bush I have ever come across. So we instead found that we could cross the river downstream a bit more, and then it was shallow enough to just walk down that side of the river until we hit the track, success. We then came across a second crossing, however this time, linking arms together did the trick. The third river crossing was much better. I actually quite enjoy river crossings, they are a bit of a fun puzzle to figure out.

We finally got to Sutherlands hut which was L shaped, quite old but kind of cute, it did have a bit of a fly problem however. We had lunch outside the hut in the sun and ate some subway that we grabbed on the way there. It was a nice lunch… or dinner or whatever it was about 5pm. We set off again, there were still a handful of river crossings to go but each one turned out to be easier than the last and so it just turned out to be a pleasant walk up the valley with some good yarns.

We got out to the car, drove back over the rutt successfully and without even bottoming out this time since Sophie suggested taking it from a different angle. Overall I felt quite accomplished having this very spontaneous plan work out pretty well in the end!

A final review on this loop track:

Getting There: Terrible, but like kind of local I guess (about a 2 hour drive)

River Crossings: Would be impossible with recent rainfall lol

Scenery: Some of the best under the bushline imo

Bonus: Cute lamb babies on the way out 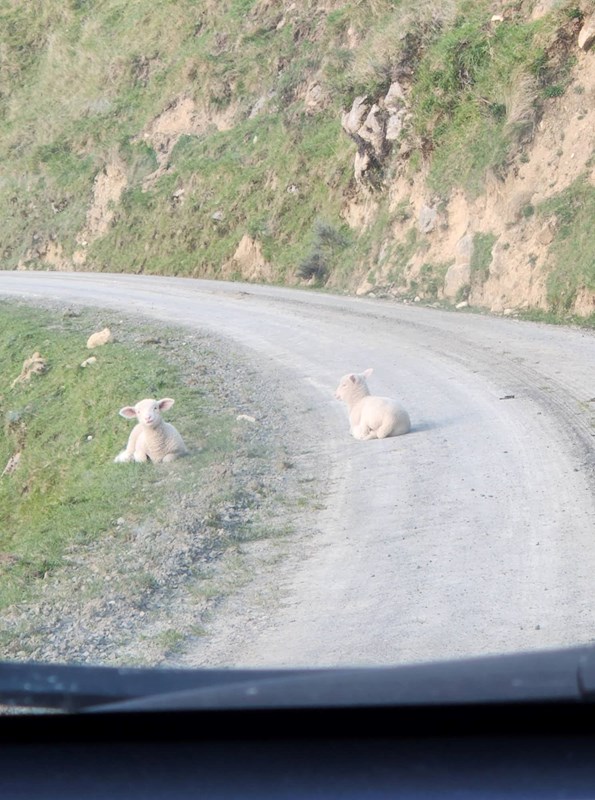