Labour weekend was upon us, so 4 enthusiastic trampers decided to make the most of the extra day off work and get out into the tararuas for 3 full days. The plan was simple, an easy walk from Otaki forks to Waitewaewae hut, staying for 2 nights (with options for day trips out there), and an equally easy walk back out. What could go wrong?

We met at the hunter carpark just past 9am, and loaded our packs (with difficulty) into the back of Lilly's car, a problem with the boot meant this had to be done from the front #shittiestch- *cough* I mean uh best chariot 😁. Nathan also had with him a black fold-up chair, why? I can't remember, but he was set on taking it with us. On the way there we saw a box labelled 'free grapefruits'. We took one each, then sped off up the road like we had just committed a grand heist.

We knew it was going to be busy, but the line of 30 or so cars parked at the roadend was still a shocker. Little did we know that from the forks we weren't going to see a single person until arriving at the hut much much later that night. The idea of bringing the chair with us was brought up, and having already taken it this far, Nathan agreed and attached it to his pack. After all, we carried an armchair halfway up Ruapehu just 3 weeks prior, and wanted to carry on the new VUWTC chair-carrying tradition. We left the car park some time just past 11am. Doc time says it takes 5-6 hrs to get to the hut from the forks, so we knew we had plenty of time to get to the hut before dark (or so we thought). There were two possible routes, the upper more-maintained track or the lower track that followed the river, overgrown, and blocked because of a major slip. We were undecided, so Nathan being the "chairman" of the group, made the decision to take the lower one. Crossing the gaping chasm that was the slip wasn’t an option, so we bush-bashed down to the river where we met a family of about 7 goats. When Lilly started maaing she almost adopted 2 kids as they started maaing back and coming closer, but eventually they decided we didn’t look like suitable foster parents and left. 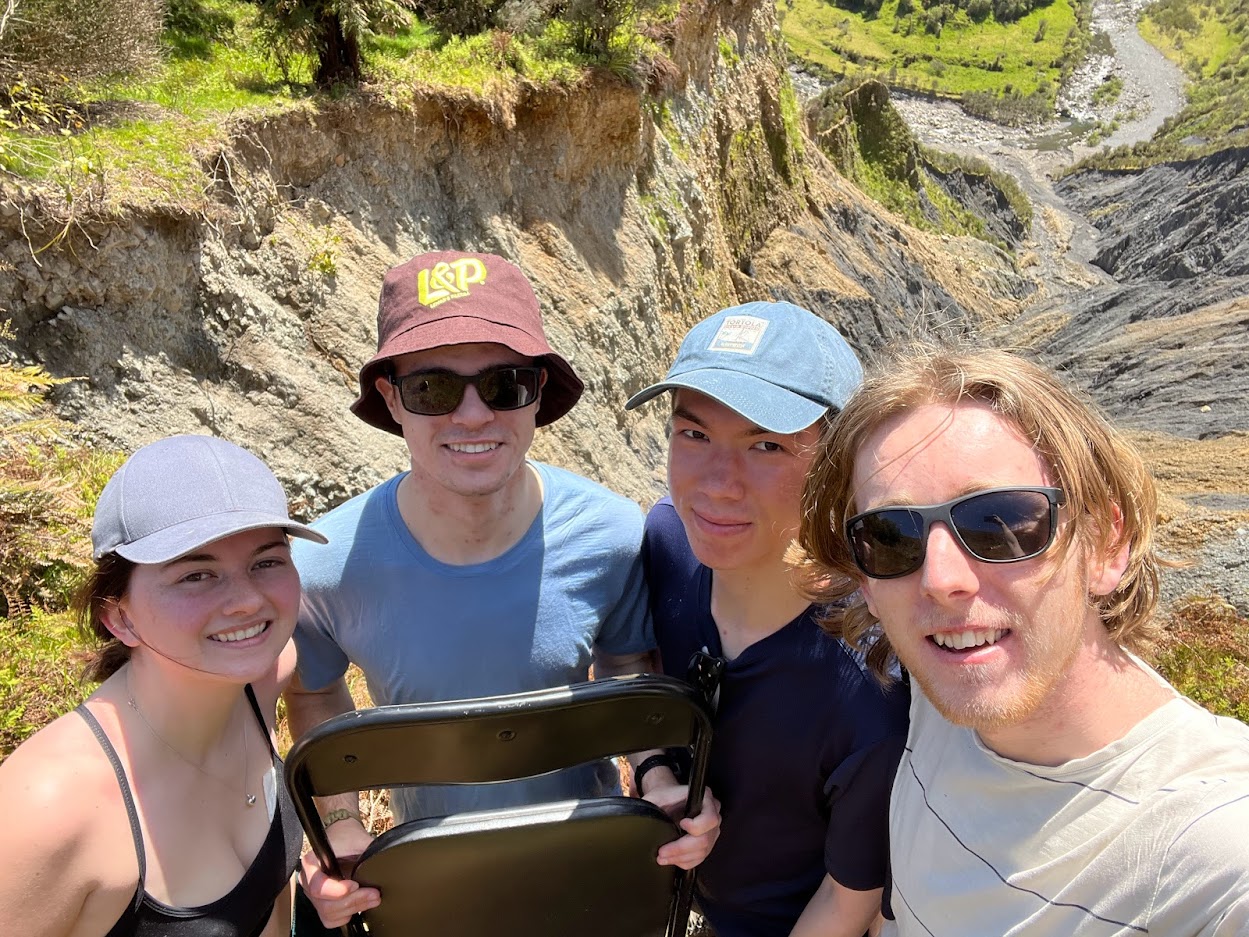 Trudging up the river was slow going but we were expecting to meet the lower track only 500m or so upstream. We passed this massive boulder and the inner caveman inside us came out and we scratched markings all over the wall. At some point I decided to turn on the GPS to see exactly where to cut out onto the track, and it was at this point I discovered we were nowhere near I thought we were. It was a different slip we cut down from and way too early, there was still another 2km of river walking. In shock I dropped my phone in the river, fished it out as quickly as I could and thankfully it seemed to still be working. 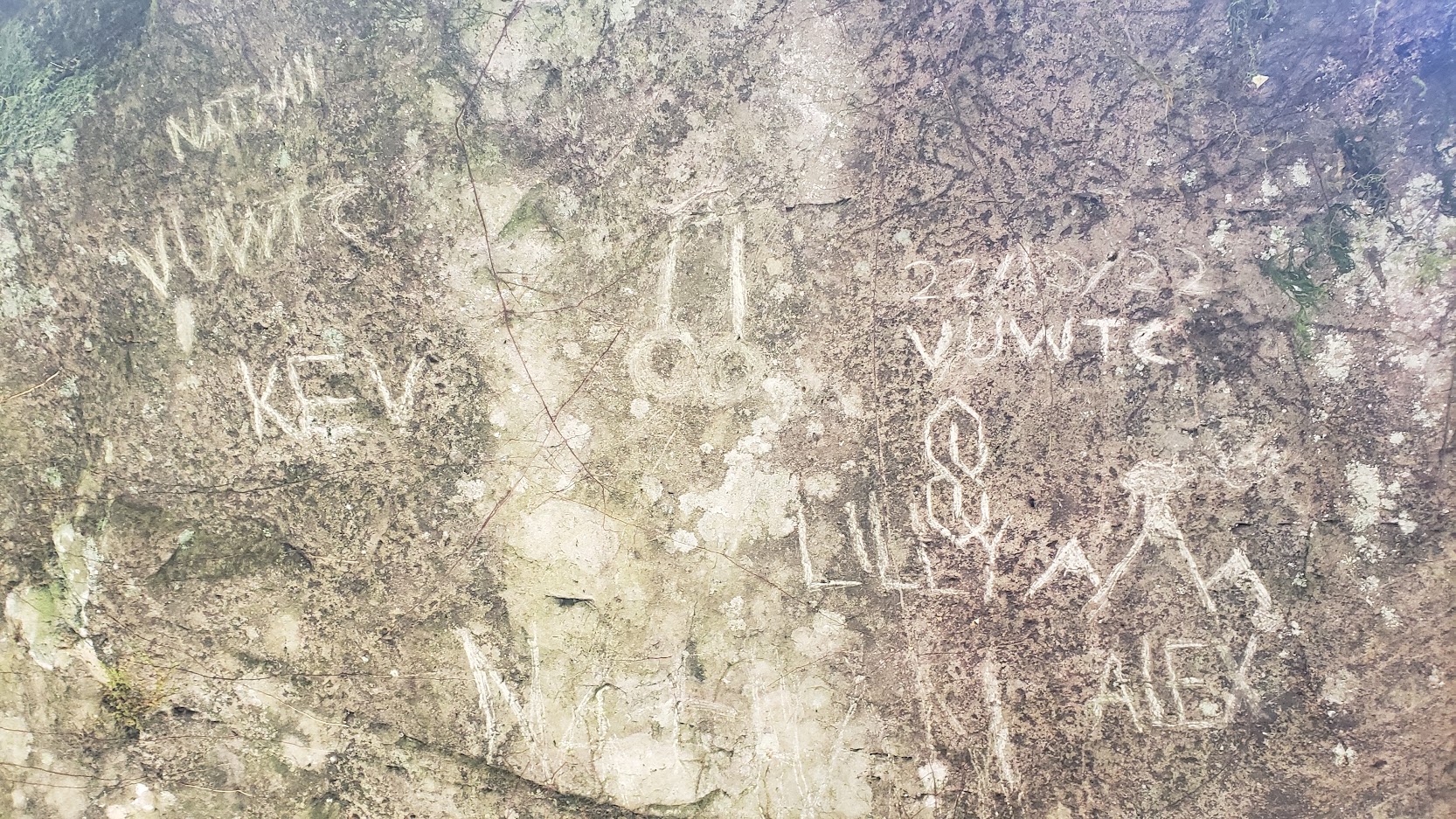 Despite this new information we weren't too bothered, the sun was shining and the water was very cool and refreshing to be walking in. We also had tents, worst case scenario we just camp the first night. It took another 3hrs to make it up the river and finally back onto the marked track, seeing the first orange triangle in a long time was a delightful sight. Not too further up the track we found this old steam engine, it was pretty cool so we stopped to take some pics. When we were done I turned on my phone to check the time, the screen was glitching out and flashing white but I was able to make out what it said - just past 5. I got Nathan to confirm on his watch as I didn't believe my eyes nor my broken waterlogged phone, but our fears were realised. Already 5pm and we weren't even halfway to the hut. And so, we boosted (and by boosted I mean just kept walking but with moderately less faff). Group consensus was to keep on pushing to the hut, and so we did. Scrambling over and under fallen trees in the dark was difficult, particularly for Nathan who kept getting the chair caught on various types of foliage. Lilly got both her new sleeping mat and legs all scratched up. When we got to a DOC sign that said 30 min until the hut, the 30min had been scratched out and ‘1 hour’ written just above it. We laughed at the time, but it did indeed take us another hour. In a couple of the streams we saw some freshwater crayfish, and by this point we were so hungry that we were tempted to fish some out, but finally we rocked up to Waitewaewae hut at around 10pm that evening. We quickly cooked up some bangers, mash and peas outside the hut and immediately went to sleep. NEVER in my life have pre-cooked supermarket sausages tasted so good. 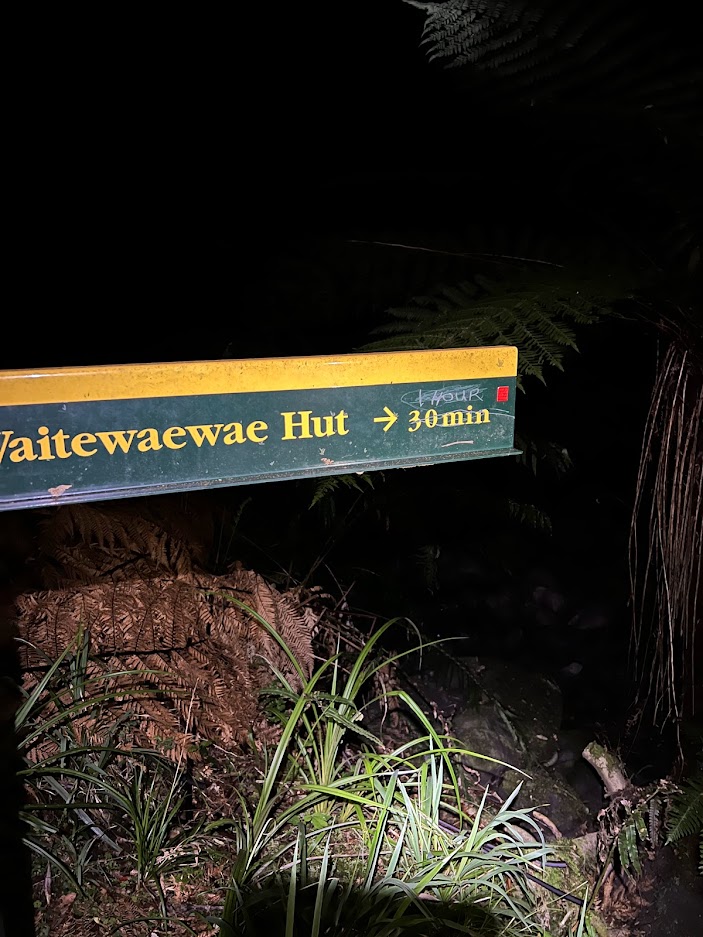 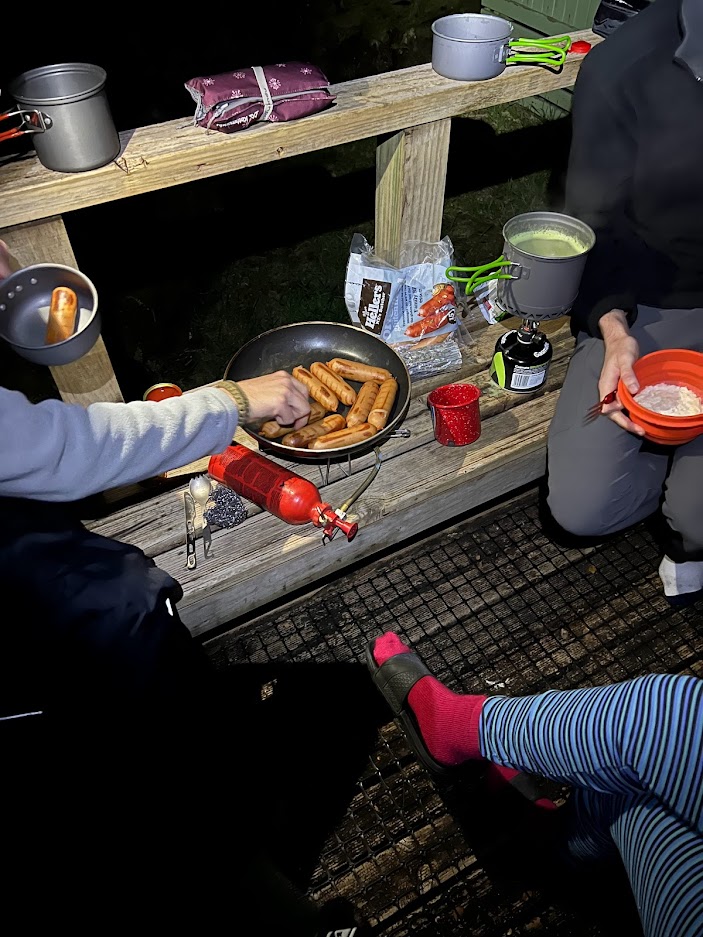 The next morning we slept in until 11:20am. We had pancakes with maple syrup for breakfast (although we didn’t have oil so they started off as blobs of dough until Lilly nailed the technique). I squeezed my grapefruit on mine and it was pretty good. No one really had any set plans for the day, but with no clouds in sight I was still keen to attempt a climb up Mt Crawford despite my knees feeling like jelly. Unfortunately I had forgotten to turn my phone off overnight and it was down to 3% battery, so there was basically no chance of me getting any pics. With just some water, my lunch, barely alive phone and head torch I set off up the hill around 12pm leaving the others behind. It was a long steep climb, it felt like it took forever and I had no concept of how much time passed until I met the odd tramper on their way down and I could ask them what the time was. Once I got above the bushline the views were incredible, and I kept going all the way up to Junction knob. Ruapehu was as majestic as ever and I could see all up the west coast. At the top the wind was strong and cold so I decided against going all the way to Mt Crawford, and pulled out my phone to check the time. On 1% battery, there was just enough for me to see it was 4pm and snag a few photos to prove I had made it. Just before the phone shut down for good, I was able to see that the pics of the beautiful views I just took were all blurry because the camera lens was fogged up on the inside with moisture 🥲 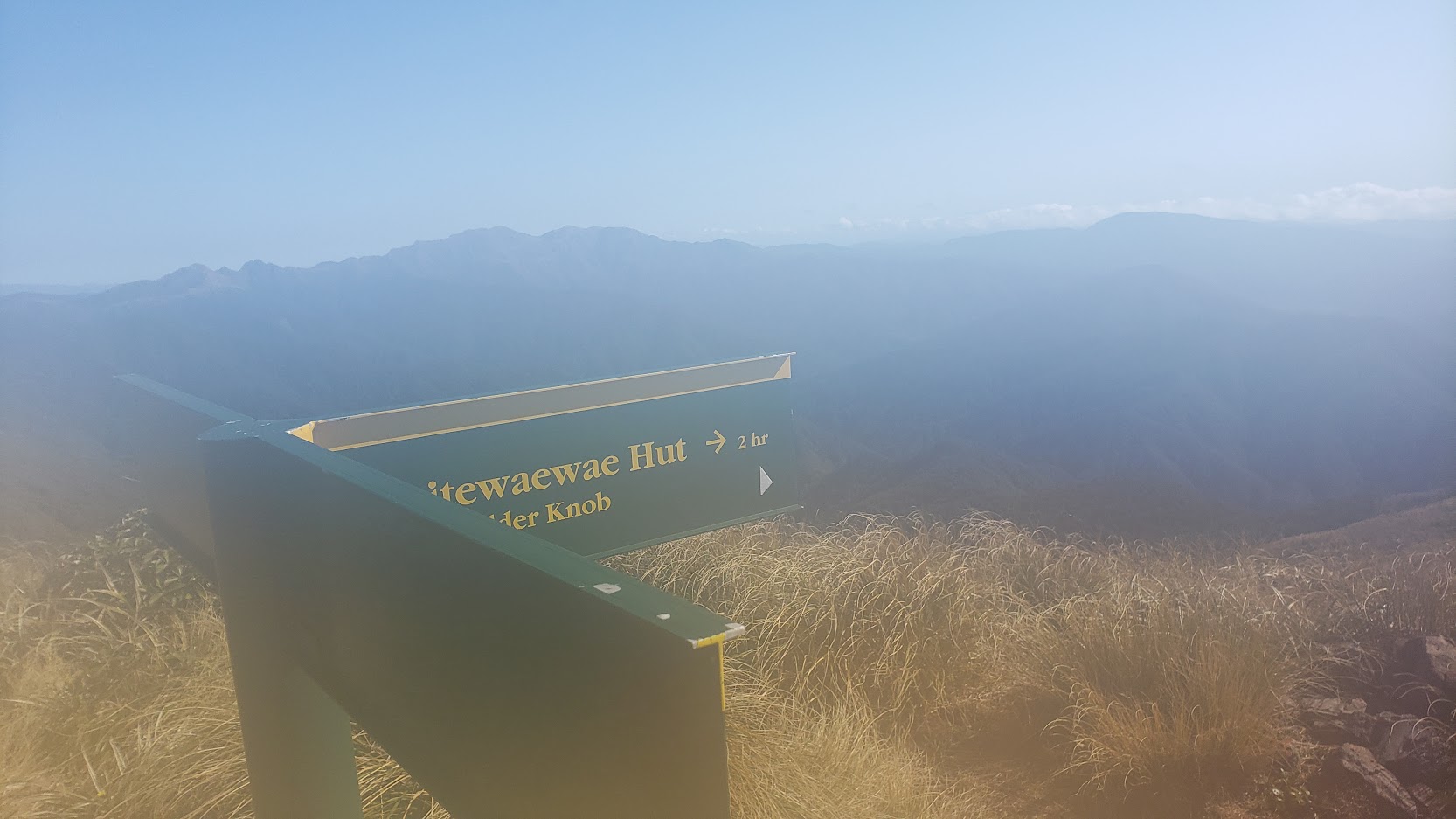 I made it back down for 6:15pm just in time for dinner where the others had been cooking up a nachos concoction with various leftover ingredients. They had spent the day taking more photos with the chair, swimming in the river, sunbathing and exploring the area. We played a couple quick card games then decided to get an early night so we could wake up early and allow plentyyy of time to get out the next day (we weren't gonna make the same mistake twice). 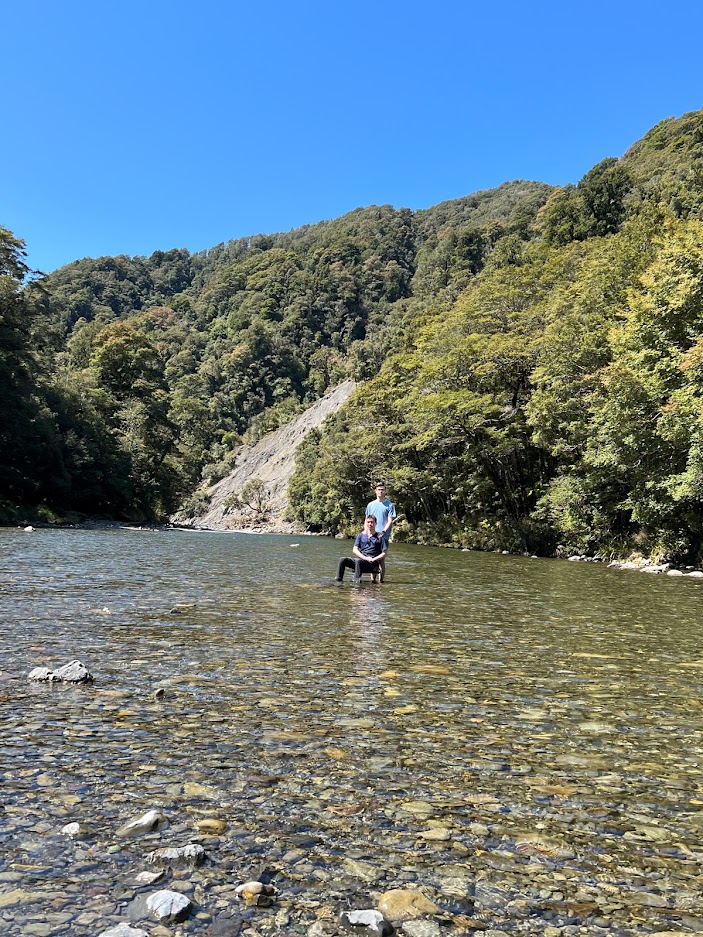 An early departure we did, saying farewell to the hut and more tragically Nathan’s chair at 7:30am. All of the talk on the way back was centred around going to Wendy’s on the way home, and we tried our absolute best to not think about the long slog ahead of us including the final 45min out from Otaki forks. Around midday we stopped for lunch and shared around all our remaining food but a few gummy snakes. Nathan poured instant coffee into his only water bottle to make iced coffee, it tasted like shit but we still drank most of it because caffeine is caffeine and we needed all the energy we could get. We took a couple more photo shoots on the way back (see Abbey stream crossing and "YM(A"), but our energy levels were dropping fast, the thought of Wendy’s at the front of our minds the only thing keeping us going. The final gummy snake was split between us just across the Otaki river bridge, so we resorted to wild supplejack and onion weed courtesy of Nathan’s foraging skills. 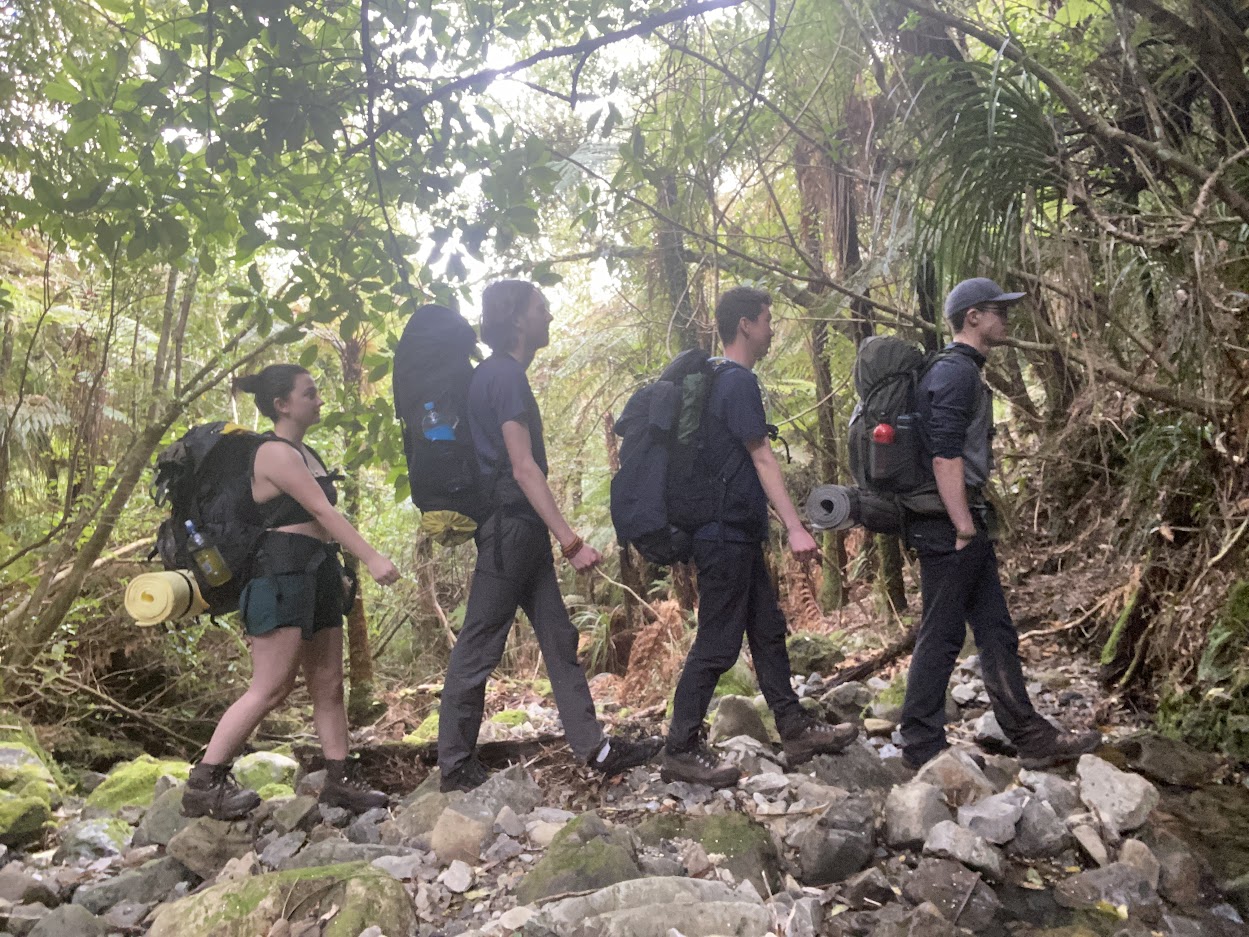 Finally we were out, arriving back at the car at 4pm. We were all starving and exhausted, on the way to Wendy's me and Kevin took another handful of grapefruits each (they were good grapefruits). At Wendy’s I was so hungry I ate 2 burgers then went back to order more food and ate until I felt sick.

Overall despite our questionable planning skill, navigation skills, and lack of food it was a 10/10 fantastic trip. Waitewaewae hut is in a mean spot and next time you go see if Nathan's chair is still there, if it is, take it and the copy of Heels down to the river and have a relaxing read.